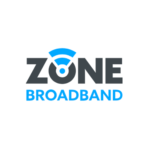 Before signing up for any broadband provider, it’s important to make sure you know a little about the company you’re teaming with, including the provider’s history, principles, and working practices. Zone Broadband consider themselves an ISP that does things a little bit differently. Based in the North East (but also with a headquarters in South Yorkshire) their service centers around fast, reliable broadband. They also have a good range of packages covering a wide variety of broadband users.

Who Is Zone Broadband

Zone Broadband are a full-fibre broadband ISP primarily covering the North East and South Yorkshire but can provide across the UK. One of their key activities is creating Community broadband packages that brings whole residential areas together in order to install full-fibre broadband. This makes Zone Broadband one of the Alt Nets aiding the Government in it’s target of bringing at least 85% of UK premises access to gigabit-capable broadband by 2025.  A further way they work with the Government is by utilising the Giga-bit scheme to have the installations funded by the DCMS.

How fast is Zone Broadband?

Whatever your requirements, there’s a good range of speeds available with Zone Broadband’s full-fibre and FTTC packages. Starting at their most basic package, you can get FTTC 36Mbps. If you currently have FTTP infrastructure in your area then you can get speeds starting at 100Mbps all the way up to 900 Mbps. On 900Mbps. Ofcom reported that the average UK household is on 64Mbps, so 900Mbps is a great speed for even the heaviest internet users.

How much does Zone Broadband cost?

When considering the cost of full-fibre broadband it is important to understand that full-fibre is the next generation of broadband connection. Just like a new mobile phone, the newer it is the higher the price it carries. Zone Broadbands FTTP connections start at £24.95 per month. This is priced cheaper than both of their FTTC packages, which start at £32.95 so there is greater value in getting a faster package from Zone Broadband. Their top package- 900Mbps is priced at £49.95. This is a competitive price but not the cheapest for this speed. With Alt Nets like B4RN providing 1000Mbps for £30 per month, there are better options for price but B4RN are not available UK wide and thus are not a direct comparison to Zone. Zone charge this because they create values in other ways as well such as having UK based support and zero fee set-up.

How long is the minimum contract length for Zone Broadband?

How do I check if Zone Broadband is in my area?

To check if Zone Broadband is in your area you can use their postcode checker on their website. Simply enter your postcode and it will show you if it is available to order. If Zone Broadband isn’t operating in your area at the moment, it’s worth keeping an eye out; this broadband provider is always looking for new areas to expand into, particularly in rural areas.

What is Zone Broadband’s coverage in the UK?

Zone Broadband are currently available nationwide but focus on community broadband projects in the North East and Yorkshire. If Zone Broadband isn’t available in your area or you do not have the infrastructure to support their packages it is always worth dropping them a call to see if they can help you.

Zone Broadband’s Trustpilot rating is at a ‘great’ level. Their customer service is spoken about highly and they do seem to meet their mission of having fast, reliable broadband. There were concerns over charges on the set-up fee so this is something to be aware of when sorting out a package with them.

What sort of router do you get with Zone Broadband?

The type of router provided with a broadband package is just as important as the speeds you expect with it. For example, if you purchased Gigabit speed broadband but your router was not Gigabit capable, you would not be able to get the advertised speeds. This then makes the choice of router a very important factor in choosing a broadband package. Zone Broadband provides a Dual band router which means that they transmit two simultaneous wireless signals, providing a better performance. These are also easier to set up.

What is the Zone Broadband customer service number?

If you have a Zone Broadband problem or query and need to get in touch with their team you can do so on 0330 135 9663. Alternatively you can email them at Email: hello@zonebroadband.co.uk